So when I got a "Registered Letter" slip in my post the other day, I did what all self-respecting people do when they're on leave: I slipped it straight to the bottom of the pile and went back to bed with my book. (I've hit an all-time low in the trashy novel reading department. The one I'm currently nose diving into even has a grammatical error in its title. It's called, "What's A Girl To Do With... An Offer You Can't Refuse". Truly, a remarkable piece of predictably unremarkable prize turd. And I cannot put it down.)

But the thing is, in spite of the registered mail slip being well hidden, its existence failed to escape my memory. And so I began pondering its sender. A deceased distant relative bequeathing big fat diamonds to me, The Pant? A book deal? In registered letter? Unlikely.

An overdue bill, totally forgotten about? More like it.

And so, by mid-day, The Daughter and I were in the longest post office queue I've ever seen. (Who, other than people who have registered letters waiting for them, actually goes to the post office?).

There was a (I'm convinced of it) transgendered individual in the queue in front of me. I think he was becoming a she, but had missed the course on How To Dress And Act Like A Lady. She was wearing an ill-fitting denim pencil skirt, teamed with a sequinned t-shirt that was most likely originally worn by Elizabeth Taylor in her early twenties and the most hideous, falling-apart-at-the-plastic-seams, used-to-be-white-but-are-now-engrained-with-dirt trainers I have ever had the displeasure of clapping eyes upon. She tried, though, and wore dangly earrings except they served only to accentuate the sheer expanse of neck - so large, in fact, that I'm sure a costume necklace, in her book, would constitute a hula hoop.

It's not the fact that she was transgendered that bothered me. Nor was it her ensemble which made me scream, "My eyes! My eyes!". Nor was it the brash attempt to convert the pretty brunette (who was, also, exceptionally petrified judging by her knocking jeaned knees) into a lesbian. It was the volume of her voice. If I'd been in bed, 6 kms away, I'm sure I'd have heard this exchange:


Transgendered: So you're flying Emirates? Brilliant beef curry. And they'll give you seconds if you ask nicely.

Pretty Brunette: I'm not so worried about the food, it's the space.

Transgendered: Ah. Plenty of space on Emirates. No problem scratching my bal... ahem... bum. My ballbum. I call it a ballbum because it's round, see?

The Daughter: I'm huuuuuuuuuungry. How much lo-

TP: Just ssshhh. Not allowed to talk in post offices.

TD: But that lady, I mean person, is.

Trangendered: And also, they're quite accommodating with hand luggage.

Pretty Brunette: Yes. I'm moving there so I'm going to need as much luggage allowance as I can get.

Transgendered: Well, if you're taking a lot of hand luggage best get yourself a back pack. And wear both the straps. It evens out the weight.

(Uuuugggghhhh - the backpack. It holds no value in this society. Of that I'm truly convinced.)

I was quite tired of attempting to appear like I wasn't eavesdropping, that I spent the rest of my twenty minute wait humming the tune to Regina Spektor's Folding Chair whilst day dreaming of being on stage singing to thousands of adoring fans.

The Pant: Hello, I got this slip. Could you do me favour and go into the back, open the letter, and tell me who it's from?

Scrawny Post Office Worker: I'm sorry, Ma'am. You have to sign for the letter and then you can open it.

TP: Well, what if I don't want the letter?

SPOW: Then don't open it.

TP: But won't the people who sent it know that I've got it if I've signed for it?

SPOW: Yes, they can track it.

TP: So won't you just go back, open it, tell me who it's from and if I want it, I'll sign for it and if not, you can just throw it away and it'll be as if none of this ever happened.

SPOW: There are cameras in the back. And up there. And there. And one over there. I could lose my job, Ma'am. Please don't make me do this.

(A begging boy: the only answer to which is pumping up the flirt.)

TP: (Lick lip) I love the way you've style your hair into perfect spikes all over your head and (gentle nibble at corner of mouth) dyed the tips blonde.

SPOW: Are you flirting with me?

TP: Would it help if I was?

TP: K, fine. Just get me the frigging letter. Chop chop. I've been in here long enough and there's a disturbingly intense smell of onions on this side of the counter.

SPOW: Here's your letter. But before I hand it over, what are you doing later?

TP: Reading the letter, I imagine.

SPOW: But you said you liked my hair.

TP: And you made me sign for the letter.

And all that drama for something quite grand. Granted, not a 5 carat diamond but at least no super outstanding bill that I've forgotten about. I got fan(ny) mail: a pair of pink pant(ies) with the function of a purse. All the way from Austria.

And so, to my lovely Austrian pantafan: G'day, mate. Let's put another shrimp on the barbie**.

**and just for the record, I quote Dumb and Dumber.  And I do so because I can. 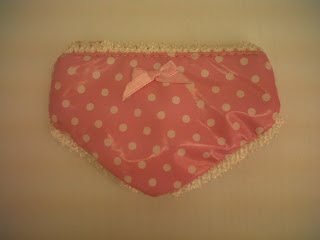